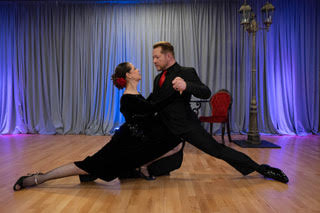 Or: The end of Tango? Seven stories from around the world.

This is the beginning of a new series about tango professionals worldwide in the current crisis of Covid-19. Their stories, and their different reactions, provide a unique snapshot of everyone’s changed reality. The sequels will appear over the next few weeks. Please stay tuned.

With the spread of Covid-19 millions of artists have lost their jobs and their livelihoods. One group in particular has been affected more than others: that of dancers and social-dance instructors, especially those involved with Argentine tango. The reason is obvious: Argentine tango is all about being close. Partners typically dance in close-embrace in a crowded social-setting called a ‘milonga.’ In short, Argentine tango is the very opposite of social-distancing and the perfect breeding ground for virus transmission. So it didn’t come as a surprise when tango venues were among the first places that had to close their doors.

I happened to be in Buenos Aires, the cradle of tango, during the fatal first week of March. Mornings I took a crowded commuter bus to my Spanish language class. In the afternoon, I took dance lessons at a tango school, and at night I would go to a milonga. While the virus was spreading from one area to another back home in the United States, Argentina —at first — seemed calm and prepared. But within a few days I could sense panic spreading. So it was no surprise when one day I was barred from continuing my tango lessons, and the next day from all tango events. Initially, the ban only affected visitors from infected regions, such as California, where I came from. But within twenty-four hours all dance schools, clubs, and tango venues were closed by government directives. My tango teachers, who until then had been rushing from lesson to lesson and from student to student, found themselves jobless overnight. There was nothing they could do.

The lockdown in Argentina continued, from the closing of schools, churches, all social gatherings, and sports. Before my return to the States I had wanted to pay a quick visit to Recoleta Cemetery, but even its gates had been locked and there were signs alerting visitors to the danger of the spreading virus. Soon after I left, everyone had to stay at home.

I managed to catch a flight back to the United States shortly before the total lockdown, and began sheltering in place on March 15. The tango world I left behind was utterly frozen. Like everybody else I watched in horror the drama unfold. Worst of all, there was little I could do to help make things better, and there was no tango to help me through this bad time. It’s true that there have been countless tango groups and online-classes on social media, trying to keep tango dancers connected. But I didn’t feel like participating. At first, I felt sorry for myself. Then I started to look closer at the faces of the tango teachers online, some of whom tried to be upbeat, but there were others who couldn’t hide their desperation. Some were asking for donations, others were selling their instructional videos online. But it was all a poor substitute for the real thing.

I thought about the tango teachers I had taken lessons with over the years. They had taught me more than tango steps; some had taught me lessons for life, some had become friends. They had been there for me and all the other students. Now it was time to be there for them.

I decided to give them a call to find out how they were really doing. I was curious to learn if their situation differed according to whether they were in Argentina, Europe, or the United States. This is a snapshot of what life is like for so many people in the world right now. Tango teachers are only a small piece of the pie, as Christy Cote said during our interview, but they are representative of almost all of us.

Orlando Farias has been traveling throughout Europe and the United States for the past two decades, teaching and performing. I first met him a few years ago when he came as a guest artist to Upstate New York. Coincidentally I saw him again shortly afterwards when he spent a week teaching in the San Francisco Bay Area. Unfortunately it turned into a short and disappointing gig for him; poorly organized and promoted. But it was a great opportunity for me to learn from him in a smaller group of people, and we became friends.

During my brief visit to Buenos Aires, I had been planning to get together with Orlando, but it didn’t happen because of my hurried departure. So instead I called when I returned home. I was not prepared to find him in such a desperate state. We used Facetime for the first few minutes before the connection collapsed, and I could see a frightened look in his face. We then switched to an audio call, and when he started to speak, his voice was somber. He said there was no work for him — nothing. At first he didn’t want to talk about himself, but about the overall declining situation in Argentina and how the economy was becoming worse by the day.

“I bought pasta for sixty pesos the other day,” he said. “And now it costs one hundred pesos.”

As it happens, his mother is staying with him. She came from Patagonia to visit in early March, and then became stuck, unable to return home because of the lockdown. On the one hand this was a good thing for Orlando since they can live on her pension, but at the same time it posed a huge risk factor.

He lives in a house outside Buenos Aires. Over the last two decades he had saved up enough money by teaching abroad to build this house. The plan was not to just live in the house, but also to add a tango studio where his students from abroad could visit Argentina and study with him. During the two year construction he didn’t have time to travel and make money, and instead invested everything into this project. Now his plans have been shattered overnight. The remainder of his savings have already been used up. He has ongoing bills to pay while prices keep rising. Fortunately his family runs a small store in Patagonia and are helping him with his expenses.

“There are government programs for freelancers like me,” he explains, “but it’s not much.”  Like so many Argentines who have tried to better their situation, he made most of his money abroad, something that has now backfired. “We who worked outside Argentina didn’t pay into the government system. That’s why we’re not part of the system now.”

Orlando was born and raised in Patagonia and started Argentine folk dance back home before he fell in love with tango. He didn’t plan to become a professional, he says, it was a natural progression. “I kept practicing and I got better and better.” Soon he was asked to perform and eventually decided to move to Buenos Aires where there was a job market for tango professionals. He wasn’t even twenty years old. All of a sudden he was on stage, performing with the stars he had admired from far away. ”A dream became true,” he remembers. For a moment his voice sounds happy reveling in the past. He traveled to Europe, Japan, and the United States. He could be frequently seen teaching in Italy and then in Russia. He explains that when Russia stopped the visa requirement about seven years ago, teachers like him were able to travel freely and teach.

“In the beginning there were only few people dancing tango in Russia,” he remembers. “They were extremely dedicated, just like Germans.” The tango community in Russia grew fast. “Russia became the best place. Not only because they are determined and practice a lot, but because they are very talented.”

I asked him if he had thought about teaching online classes. He doesn’t offer any, but thinks they’re good as training. “Online classes are about moving, and exercises: things that are always important.” As for his own exercise program, he practices ‘ochos’ (stepping like a figure eight) every day at the barre in his new studio, then gets on his bike and works out at his gym. He spends a great part of his day staying connected with his students all over the world, mainly because he wants to make sure they are okay. It touches me that despite his own desperate situation he is deeply concerned about the well-being of others.

What does he think about the future of tango? “Tango is about being face-to-face and in close-embrace,” he says. “So of course, everybody in tango is at high risk and that’s why we’ll be the last ones to re-open. Everybody is now scared to touch each other. Maybe outside Argentina tango might change, but not here, no. This virus will be forever.”

He believes that this could be the end of tango as a business. Tango has played a big part in Argentina’s tourism industry, and if it ceases to exist, it could hurt millions of other people in this industry as well. But hasn’t tango survived other crises, I ask — like the military junta?

“That was a dictatorship,” he explains, “which tried to kill all the intellectuals. The intellectuals were into tango, so they didn’t allow milongas. When we went back to a democracy, tango came back. But this virus is different. It’s like cutting somebody’s leg off. Can a dancer dance without legs?”

So what is his plan? He shrugs. “It’s time to think about Plan B,” he says vaguely. “Maybe move to Patagonia, and join the family business.” And then he says something rather philosophical: “In the end, it’s our own fault. We never took care of the earth.”