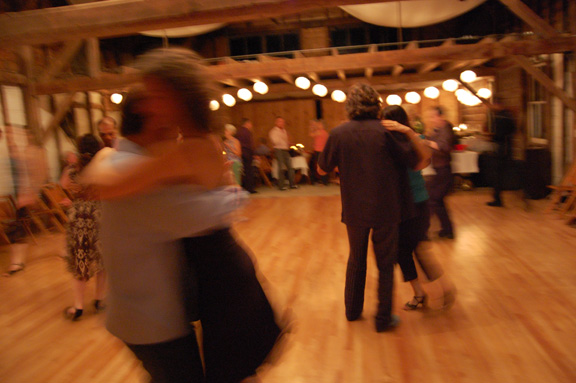 I love dancing at unusual places. Over the years I’ve been to a number of venues that seemed unlikely settings for social dance events such as milongas, but which later turned out to be the best and most memorable ones.

Such was the case when I was first told about what sounded like ‘Moolonga’ in Washington County, New York. My initial thought was they must have made a mistake! I understand these people live in the country, but they must know that it is called ‘milonga’. “No, no,” I was assured, “you’ve heard it right, we’re calling it ‘MOO-longa’ precisely because we do live in cow country,” explains Fred Luckey, dryly.

Fred and his wife Florence, known as Flo, are passionate tango dancers and proud owners of an old farmhouse outside the tiny village of Easton, close to the Vermont border. They have converted their historic post and beam barn, which dates back to the first half of the 19th century, into an impressive ballroom-style hall with one of the best dance floors I’ve ever set foot on — its quality is enough even to make some club owners in Buenos Aires blush. The long tables for communal potluck dinners before the milonga begins, provide a homey and comfortable feeling where strangers are easily welcome to the local tango community. Some Argentine guest artists who have stayed here – Mariana Galassi, Jorge Torres, Diego Blanco and Ana Padron, Michael Nadtochi, Orlando Farias, and Angeles Chanaha among them – have enjoyed the experience so much that they’d like to return. The reason is not only because of the barn itself, but also the extraordinary setting of this unique country property and the hospitality of Flo and Fred. “Mariana in particular loved the quiet mountain area,” reveals Fred. “She would disappear to go hiking by herself before teaching and dancing until late at night.”

You wouldn’t think of this remote spot in rural New York as being a popular gathering place for Argentine tango dancers from near and far. How did this come about? Both Flo and Fred had lived in New York City for many years before they met – while dancing, of course — and fell in love. Soon after becoming a couple, they decided to leave the city and to move to a quieter part of the East Coast. It had to be somewhere between New York City, where Fred still has a job, and Upstate New York, where Flo’s family is rooted. Flo recalls after almost twenty years of living in Manhattan they felt the need for a quieter lifestyle. They started by scouting the area a few hours north of New York City for a new home. It took a lot of searching and quite some time before they discovered this almost forgotten abandoned farm, built probably in the early 1820s, hidden and tucked away under trees, located near what is now a dairy farm off a remote country road leading up to Willard Mountain. “I don’t remember how many places we looked at,” says Flo. “But when we finally discovered this old farmhouse, we just knew this was the right place.”

I find this hard to believe when I hear what they tell me next. When they first found it, both the farmhouse and the barn were occupied by squirrels and raccoons and in such bad shape that no local bank would consider giving them a loan. To make matters worse, the property was so entangled in bankruptcy proceedings and back taxes that it took almost two years to sort out who owned it.  After more than two years a purchase agreement was worked out with creditors and a bank in nearby Vermont approved their loan request. Finally Flo and Fred could claim the farm as their own. While admiring their persistence, I still don’t understand why they hadn’t walked away at some point during this difficult process. What was the draw? “The draw was the setting,” says Flo. “There was a feeling about it.”

In the end it took them about ten years to get the house into the beautiful condition it’s in today. Step-by-step, while both of them were still working full-time, and with the help of family and friends, they turned the badly neglected building into their dream home. All that time their focus was set on the house. They didn’t dare to think about the adjacent barn – although they always fantasized about having a dance barn.

But then, just when they thought they were done and could get on with the rest of their life, Flo’s niece called from Vienna with the news that she was getting married – and that she wanted her wedding to take place at their farm! Needless to say, the wedding was supposed to include dancing. There wasn’t enough space in the actual house for dancing, so Flo and Fred rolled up their sleeves once more and got to work on the barn. “First of all we had to empty out all the old machines and equipment and piles of 25-year old hay,” recalls Fred. “You wouldn’t believe what we found in all that rotten hay!” adds Flo. The barn was lopsided and unsafe. But once again with lots of help from Flo’s family, they turned the old barn into a modernized and charming place with art work on the walls and an eclectic mix of antique and modern design elements. For the dance floor, Fred first poured a concrete base to create protection from moisture. Then he put in heat and finally installed a beech floor with used wood flooring from a military base that had been closed.

When the work was done, Flo hung up two chandeliers over the dance floor for the wedding. They give the place an almost magical touch at night. “That’s when we started calling it the Cinderella Barn,” she laughs.

The wedding was a success, but having turned the old barn into a festive space, the question was now what to do with it? Both being dedicated dancers with not enough opportunities to follow their passion, they decided to open the barn for tango dancers and become hosts for visiting guest artists and to organize milongas. Not only that, but they also designed their own t-shirts featuring the ‘MOO-longa’ logo and two dancing cows. They raffle off the t-shirts – together with their honey from their bee hives— during milongas, and as a result the ‘MOO-longa’ shirts are all over the world. In the meantime they’re about to get into a new kind of business: a distillery, where they produce eau-de vie from their own apple trees. Do they ever get tired, I wonder? “It is a lot of work,” admits Fred. But as Flo adds: “It’s great to breathe life back into a 1820s house that today provides wonderful tango and many other special experiences.”

One thought on “The Tango Barn”