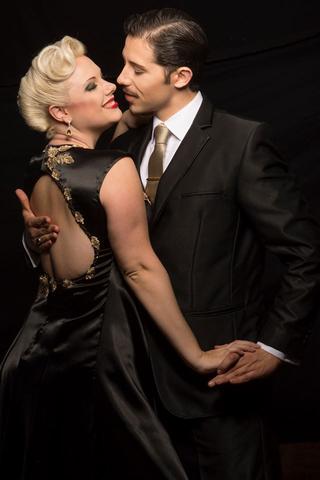 Nicholas Tapia and Stephanie Berg won the Official Argentine Tango USA Championship in 2014 in the Salon Tango, or ‘Tango de Pista’, category — the highest regarded category of this prestigious tango contest. The Bay Area couple had met only two years before and had quickly decided to team up. The winning title of the Tango USA Championship got them on the way to the Tango Mundial in Buenos Aires that same summer where they represented the USA to compete against numerous outstanding dancers from all over the world. Nicholas and Stephanie came in fifty-eighth — a very respectable result given that no couple from the USA has ever won a title. Last year they competed at the Tango Mundial again, not as representatives of the USA, but on their own. Once again they made it to the semifinals, but not all the way to the top. This year, they decided not to participate in the Tango Mundial, but instead to focus on building up their own dance studio and a new life near Phoenix, Arizona. After several attempts to schedule an interview with this busy and bustling couple, I finally managed to talk to them while they were driving to their new studio.

“How does it feel not being in Buenos Aires where the Tango Mundial is taking place right now,” I want to know. They both agree that it’s okay and that they are not emotional or sad about not being part of the event this time. “Being in Buenos Aires is always a treat for us,” says Stephanie. “It’s like recharging batteries. But this time we just have too much on our plates.” Instead, Stephanie has other exciting news: she was just chosen by Arizona State University to teach the university’s prestigious Tango Club. This is a rare opportunity at an American public educational institution to bring Argentine tango to a motivated younger crowd of people who are still completely in ‘study mode’. The ASU Tango Club’s program starts with the beginning of the new school year in September. For Stephanie and Nicholas, who is going help with the teaching, it means carving out time from what had originally been reserved for building up their own dance studio, which they only began earlier this year.

Now another exciting opportunity has just come along. It’s early Sunday morning, and they are both bubbling with news and excitement. We are on a Skype call and I can watch while they are driving. The big news is that they have just been invited to audition for the highly acclaimed tango show, Arrabal, which had its world premiere in Toronto two years ago and is soon coming to New York City. “We don’t have the gig yet,” says Nicholas humbly when I congratulate them both on being selected for the audition. “For now it just means we’re not getting enough sleep!”

It seems like they are building a solid career for themselves. So many new opportunities. “Is this the result of having won the Tango USA Championship two years earlier,” I want to know. “How has winning that title changed their lives?” For the first time during our conversation they are silent for a few seconds. Then Nicholas says that it was the moment when he decided to become a full-time professional tango dancer. “I had the choice between becoming a geographic information scientist and splitting my time between that job and dancing, or becoming a professional dancer,” he says. “Since I don’t like sitting at a computer all day long, it was clear which path to choose.” Together with Stephanie, who had already been a full-time professional ballroom teacher, he went from being a part-time dance instructor to a full-time tango dancer and instructor. Since then they have competed in six major competitions and trained several of their dance students to compete. They are particularly proud of having coached John Demenkoff and Diana Bradshaw, the winners of the Senior Salon Tango category of this year’s Tango USA Championship. “We get so excited when our students are out there on the competition floor!” laughs Stephanie. “We cheer them on and we jump up and down and we shout like parents at their kids’ high school soccer match!”

Not everyone who likes to dance tango wants to become a professional. What indeed would be the point for most tango dancers of competing? Nicholas and Stephanie both become quite passionate: “Competing is an opportunity to set yourself a goal,” explains Stephanie. “People who come to us are enthusiastic about tango and they would like to have an incentive. Working towards a goal like a competition gives their dancing a tremendous boost. It’s a competition with yourself, a journey, and it forces you to push yourself.” Nicholas adds: “We look at competing in a healthy way. It encourages people to altogether take better care of themselves.”

What do they recommend for improving one’s dancing and what do they do to stay at their best? “We firmly believe in cross-training,” says Nicholas. Pilates, yoga, weight training, and ballet are part of their training regimen. And they are constantly investigating in different ways of looking at tango. Stephanie, who has been dancing ballet since childhood, also studies anatomy, using that knowledge of the human body in her teaching.

Having reached this high level of dancing, is there still anybody in the tango world from whom they can learn? “Of course, definitely!” they both agree. Aside from working on maintaining their own sophisticated level of dancing, they try to keep up with new trends in tango, which keeps changing. “We feel a need to stay on top of the industry standard, so to speak, and to break new ground all the time.” Speaking of breaking new ground, I remark on Stephanie’s noticeably blond hairstyle on stage. While most ladies choose a classic slick black Argentine tango hairstyle on stage, Stephanie turns into some kind of blond bombshell on the floor, immediately attracting attention. How did she come up with this this almost outrageous look for tango? “It’s something I’ve developed from ballroom dancing,” she giggles. “It’s not really me, anybody can look like that.” Since she is a brunette in real life, I wonder how Nicholas feels about the dramatic transformation of his partner on stage. “I don’t really see it,” he answers evasively. “I focus on feeling and connecting with her.”

I’m not sure whether to believe that or not, but since they have reached their destination, we have to end our conversation and say our goodbyes. Now I’m more curious than ever to see where this energetic young couple is going to go…