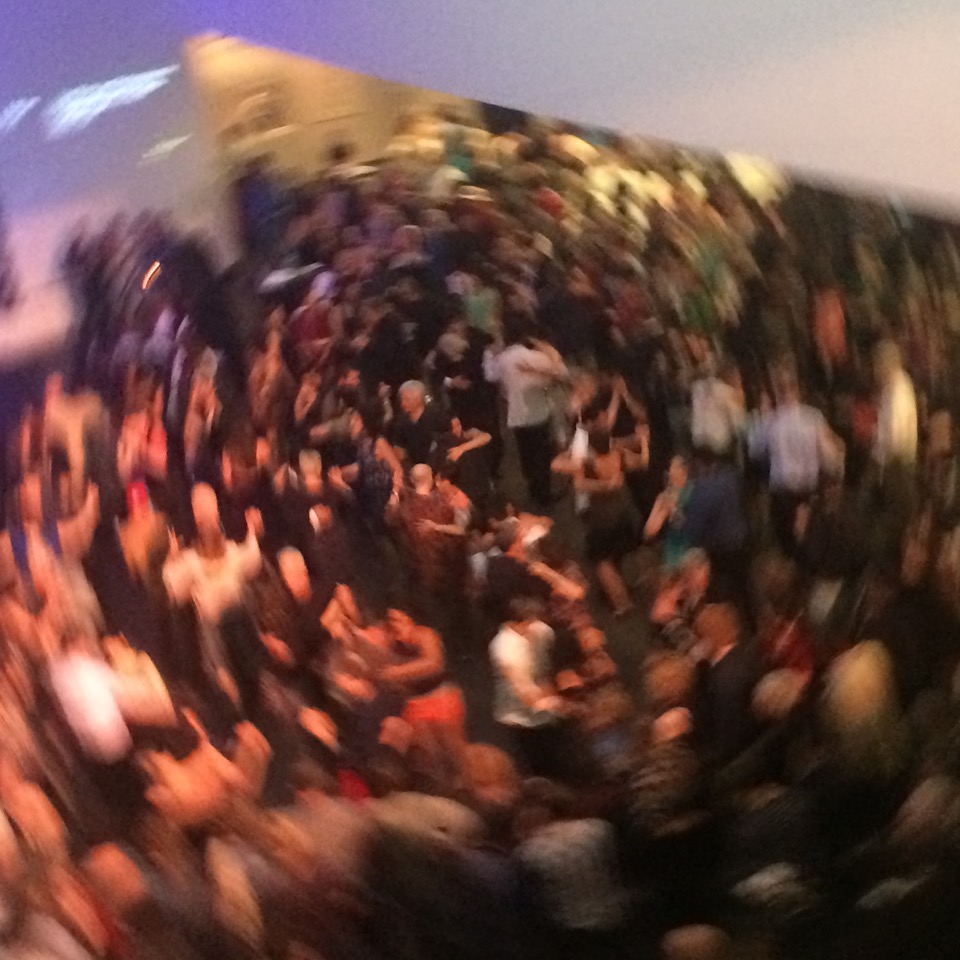 When Beatrice walked with Terence into the big foyer of San Francisco’s de Young Museum on a Friday evening earlier this summer, a hundred and fifty people were waiting in their chairs. Baffled, she turned towards the museum’s public programs director, Renée Baldocchi, and asked her: “They are waiting to watch us teach, right?”

“Yes, they are waiting for you to teach the lesson because they want to participate!” was Baldocchi’s response. For a moment, Bea gasped. This was far beyond what she had expected for their first tango lesson at the museum. What was supposed to be an experiment — teaching a beginners’ lesson of Argentine tango at one of San Francisco’s most prestigious museums — had triggered an unexpected and overwhelming response.

After taking a deep breath, Beatrice and Terence, both long-time tango dancers, got to work: they stepped onto the floor and invited people to join them. Their plan had been to simply teach the tango eight-step basic, not expecting that many of these first-time tango students would really be able to manage it. But at the end of the lesson almost everybody danced the basic eight-step, some actually quite well, others in some kind of… well, let’s call it ‘freestyle’. But best of all, all those one hundred and fifty people who had been waiting in their chairs, including children, stayed through the end, creating a happily whirling and twirling mass. “It was such a wonderful thing that everybody was out on the dance floor, old and young, and even children.” Beatrice raved. “It was a huge success!”

Beatrice Bowles and Terence Clarke consider themselves ‘Ambassadors of tango’. In real life, they are writers. Beatrice does audio recordings, the latest one being a children’s book with music titled The Girl Who Said NO! Terence is the author of nine books, the most recent a novel titled The Notorious Dream of Jesús Lázaro. Both love dancing tango because, as they express it, “tango is a perfect balance for the mind and the body…with considerable soul thrown in.”

With the lesson ending, the actual big event of the night, the milonga with live music by San Francisco’s Trio Garufa, began. A sizeable number of the Bay Area’s Argentine tango community appeared and danced along with some of the newly converted dancers who had stayed after the previous tango lesson. Trio Garufa has been Beatrice’s and Terence’s orchestra of choice ever since they started organizing the free Argentine tango event at the de Young ten years ago. “Trio Garufa’s tango music speaks to people both in and outside of tango,” says Beatrice. “They keep getting better and better in tying people in.” After all, the actual mission of the tango night at the de Young is to get tango more attention — and a boost for the museum. “People get to see the priceless treasures of the museum,” she continues. “And many of them get exposed to Argentine tango for the first time.”

What seems like an odd mix has actually been a successful relationship right from the beginning. The tango event attracts people who otherwise would not come and see an exhibition at a museum. But when Beatrice and Terence initially approached the museum, they were not sure at all how their proposal for a tango event at the de Young would be received. They were prepared to encounter the same barriers they had first met at the Ferry Building where they were by now running a free tango event. “Our initial idea had been to bring a milonga to a public place,” explains Beatrice. Since she knew the people who ran the iconic Ferry Building, she and Terri asked them what they would think about a tango event. At first, the Ferry Building’s management was skeptical: how do food and wine and restaurants tie in with tango? Somehow the couple managed to convince them. And to their own surprise, the Friday night milonga was immediately a huge success. A lot of tango dancers showed up, and even though they didn’t consume any wine or much food, the people who run the Ferry Building understood that the event attracted a lot of attention to the place. It has been a regular annual event ever since.

Next, being both museum lovers, they thought of a similar event at the de Young. They had carefully laid out their strategy of how to propose the idea over lunch to the then head of the museum, John Buchanan (who since has passed away). But already after Terri’s second sentence — ‘we are thinking of a tango event’ — Buchanan interrupted him with a full-hearted ‘yes!’

“He was a very open-minded person who understood that the museum could benefit from such a free public event,” says Beatrice. What made it a lot easier this time was the fact that the museum had a small budget making it possible to pay Trio Garufa as well as Terry for DJing. Not sure what turnout to expect, they were astonished that so many people showed up for the very first event. The magical combination of music and museum seemed to have worked. At some point Beatrice, who is a passionate photographer, went to the balcony upstairs and looked down at the crowd which, as she remembers it, looked like ‘a black-and-red peony’.

The combination of live music and dancing is apparently a festive and successful way of bringing people in. But organizing and promoting the event took a lot of work: for the first few years the couple printed flyers and handed them out wherever they went; they created e-mail lists; used social media; and did a lot of different PR. Now that word has spread, most of the PR is done by the de Young’s public program director, Renée Baldocchi, and by continuing word-of-mouth. “We’ve got the whole organizing pretty much under control by now,” explains Beatrice. But they don’t want to stop here. Their next project after the annual spring/summer event at the de Young and tango on Valentine’s Day at the Ferry Building, is to host tango on Thanksgiving Day at the de Young’s sister museum, The Legion of Honor. But that’s not the end of it by far: “We could also envision organizing tango at a museum in New York,” smiles Beatrice. “Or in Paris or in Venice! Who knows?”

2 thoughts on “Ambassadors of Tango”