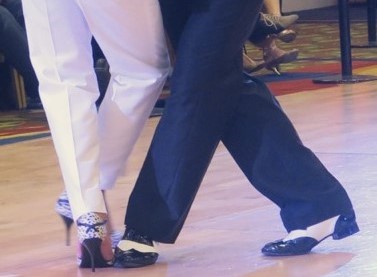 What was it with these heels? Yes, what exactly was it that so mesmerized the audience about Claudio’s heels? He was wearing these tango high-heels just like all the other followers on the dance floor at the recent USA Tango Championship — except that Claudio Marcelo Vidal is a male dancer in high-heels. And that, apparently, was more remarkable than anything else, even for people in ‘oh-so-open-minded’ San Francisco.

Let’s get this straight: the fact that men are wearing high-heels in tango is nothing new. Even the Mundial de Tango in Buenos Aires, with its rather conservative rules, has accepted same-sex competitors since 2013, a fact which, of course, entails men in the role of followers dancing in high-heels.

Wearing high-heels changes the position of the foot and what you can do. It helps to create the elegant cat-like walk that we followers strive for. For Claudio this was not an issue. He had been doing this for a long time. So he became the first man not just to be part of a male-only couple, but also the first man to dance in high-heels in the Mundial. However, when he entered the competition stage with his then partner Esteban Mioni, two of the judges left the panel in protest.

The incident caused enough of a riot in the tango world to be picked up by some major newspapers in Argentina: La Nación, Clarín, and El País; even the New York Times in the US reported it.

I’m not sure if the tango world in Argentina even now has fully accepted the role and appearance of same-sex couples in the Mundial — or at milongas or anywhere else. During my conversation with Claudio and his partner Sidney Grant shortly before their performance at the finals of the USA Tango Championship at the end of March they explained to me how even in Argentina gay men take a more conservative position on tango than here in the US. “Tango is a dance between a man and a woman,” says Claudio. “Culturally, men only danced together to practice so they could impress the women with their skills. But they wouldn’t dance together in public. These days, you might be asked in class by a teacher to dance with another man if there is a shortage of women. But it’s just not traditional for men to dance together.” And Sid adds: “When we first met in Buenos Aires, he wouldn’t go with me to a gay tango club — he hadn’t even heard about it!”

Sid has a different take on the subject. He has pioneered in New York as a gay dancer, trying to break the stigma that surrounds men dancing together. He won the 2011 USA Tango Championship in New York with a female partner, but then started to focus on dancing with male partners only, working against what he calls ‘the machismo in dance’, especially when it comes to same-sex couples. “It’s about harmonizing and about overcoming outdated beliefs,” he says.

Sid’s and his partner Claudio’s differing perspectives on the role of all-male couples in tango, both professionally and personally, not only make their partnership special but are also a reflection of the complex views shared by the general public about same-sex couples. The very people who regard same-sex couples on the dance floor as a perfectly integrated part of the tango world may still sneer at a man who dances in high-heels. On the other hand, whenever two women are depicted dancing tango together — as has been the case in movies, on posters, or in art work — it is usually perceived as erotic and sexual.

“Tango is not about sexual relationships,” objects Sid. In this respect they both agree. “Tango transcends religion and gender. In our society, which seems to compartmentalize, we want to show that tango can overcome prejudice and outdated beliefs.”

They had high hopes of winning this year’s USA Tango Championship, and were excited to compete in the same city where, at the beginning of the LGBT movement, Harvey Milk was assassinated. Nevertheless, they said: “We are not rainbow-flag waving people.” Unfortunately, they were not among the top three in this year’s Salon-style category. I can’t imagine how disappointed they must have been — as were I and many others who had watched and cheered them on from the first night when they appeared on the competition floor, with Claudio tripping along in his high-heels on Sid’s arm. Their enthusiasm was infectious. The first and only all-male couple to compete in the USA Tango Championship earned extra applause from the audience. They danced beautifully and professionally as they had done many times. But it wasn’t enough.