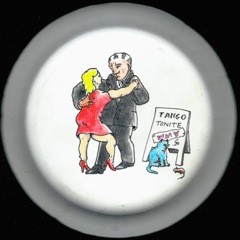 The first time I attended a local milonga in Albany I noticed a small group of young girls sharing a table. They stood out because they were so much younger than most of the other dancers at the event that night. They also appeared very well-behaved for people their age and were presumably well educated. With keen eyes and obvious know-how they assessed what was happening on the dance floor and seemed very eager to get a chance to show off their skills. However, nobody asked them to dance, and their interest in what was going on around them grew visibly less. Finally one of them got up and approached the host, hands on hips: “Mister Magee, what did you tell them?” she asked briskly. A bit taken aback he replied: “I told them to ask you to dance before they had a drink and not after!” That didn’t go down well with the young ladies — nor had it with the gentlemen. They didn’t want to be told when and how they could ask the women to dance, any more than the girls appreciated the well-intended suggestion, since they ended up not dancing all night.

As it turned out, the girls were students at a prestigious private all-girls school in nearby Troy. In addition to their regular curriculum they had taken classes in Argentine tango. It had been added as one of the optional ‘practicoms’: additional classes such as horseback riding or gun shooting from which the girls could choose. The idea of instructing teenage girls in tango was quite a novelty, and initially not received with great enthusiasm by the school’s directorate. It took the school’s dance instructor, Kevin Magee, about a year and half to get his proposal approved.

“My initial proposal was to teach the girls tango with boys the same age,” he explains. “I wanted the girls to develop a positive contact with boys.” Since most of his young female students had been exclusively educated at same-sex schools, their social contact with boys was principally limited to annual high school dances at area schools.

“Do you know what happens at these high school dances these days?” Magee asks. “It’s not dancing, it’s despicable!”

He remarked how the girls would return from these so-called dance events appalled and frightened. He felt certain that through a structured couple-dance and with strict tango etiquette these boys and girls could develop a more positive attitude towards each other.

While he had no problems getting his own girl students excited about the new Argentine tango program, getting boys involved turned out to be impossible. He was puzzled when he received an explanation from the counselor of a nearby private boys’ school: “Tango is too intense for them,” she said. “The boys are too scared!” Not believing what he heard and being encouraged by the girls’ enthusiasm, Magee continued to try various approaches to get boys interested in tango.

But it was all to no avail. “The boys wouldn’t leave their environment,” he says. His last hope, a young fellow who was popular with the girls, often entertaining them with great success during lunch breaks, turned out to be a failure. When it came to the first joint tango lesson, he sat with his back to the girls, remaining frantically focused on his mobile phone, unable to face them. When finally his mother came to his rescue and escorted him out of the room, the girls simply shrugged and claimed that they had known all along that he was just a big mouth, and would not have the guts to learn how to tango.

With no options left, Magee decided to teach the girls on their own. They would have to learn to both lead and follow. To his amazement he discovered unexpected talents. During the very first lesson one of the students demonstrated outstanding abilities as a leader.

“It was a miracle to watch that girl!” He remembers, still excited. “She immediately got that stride, that cat-like walk, and she picked it up just by watching!” The shape of her embrace was extraordinary. Not only was she about to become an outstanding tango dancer, but she also went on to write her final — and very well-received — thesis about her tango experience at the school. Later on during her college studies she joined another tango class only to discover that there was no proper instruction for the leaders. “She immediately got the guys organized behind her and started teaching them herself,” Magee says proudly.

To make up for the lack of interaction with the boys and to provide them with the ‘real’ social dance experience, Magee invited the girls to the milongas that he regularly organizes for the Albany Tango Society. He needed both the school’s and the parents’ approval for these outings; furthermore, the girls had to be back at the dorms by 10 pm — rather early for a real tango night. No fewer than four adults would escort five girls at a time. The girls didn’t particularly appreciate this kind of attention, thinking it unfair that they could go out to restaurants by themselves, but were not allowed to attend a milonga without teachers and parents shepherding them. But once again they proved to be resourceful and bold. Some of them organized their own trips to New York City on weekends to get the ‘real’ experience. Following their teacher’s advice, they quickly learned which places were best for their own dance experience and how to choose the right leaders for themselves.

In the city they were exposed to dancing in close-embrace. When I hear this I’m puzzled, but then I get it. Physical contact between teacher and students is, of course, not permitted at school, not even in dance class. So Magee had focused exclusively on salon style open-embrace. That changed when he brought professional Argentine teachers Diego Blanco and Orlando Farias to the classroom. Unaware of the school’s policy and thinking nothing of it Blanco and Farias began teaching close-embrace. How did the girls react? “They were so excited!” Kevin Magee remembers, smiling. “They were not afraid at all, but rather bold.” From then on there was no turning them back to open-embrace.

“The girls matured during tango,” Magee recalls. “It was definitely a lesson for life, and they did so well, being bold and outgoing, and began to understand that boys basically function the same way as they do, being afraid of each other and insecure.” The girls managed to overcome these fears and their biased opinions. A small group of them even got together after graduation and traveled around Europe for a month, going to places like Berlin and Paris — to dance tango.

The school’s Argentine tango program has ceased for the time being, but Magee is hoping to bring it back to life sometime in the future. After all, tango can be a useful lesson for life, one that never expires.